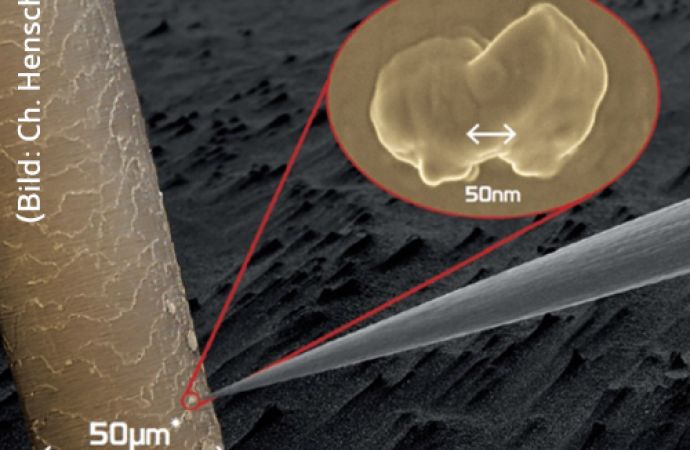 Superhydrophobic surfaces have been the subject of numerous research efforts in the field of surface technology, not least since the description of the lotus effect by Barthlott and Neinhuis in 1997 [1]. The relationship between roughness and the wetting of surfaces coated with a water repellent was already described by Wenzel in 1936 (Fig. 1) [2]. In 1944, Cassie and Baxter [3] showed that in the caverns of a rough surface of a hydrophobic material, when wetted with water, air is trapped and a composite state (liquid, solid air) is established.

In summary, the basic structure of a superhydrophobic surface has been known for a long time and has been extensively described, but the mechanical strength has so far been the greatest challenge in the design of such a surface. Therefore, the technical implementation of the principle on an industrial scale has so far hardly taken place, contrary to what was originally hoped for. For example, facade paints and roof tiles were developed according to this principle. Rhenotherm has developed the Lotuflon system, which works well for liquid media, but cannot withstand strong mechanical loads.

PMMA (polymethyl methacrylate) and/or POSS as well as various perfluorinated materials such as silanes and phosphazenes are used as water repellents. The covalent bonding of the perfluorinated silanes is also described in some papers [4]. Recently, robust superhydrophobic coatings based on fluoropolymers combined with inorganic materials have been described by Zhanjian et al [5]. But what all the methods described have in common is that the creation of micro- and nanostructures is complex and unsuitable for industrial production.

Rhenotherm therefore uses structuring methods that are widely used in industrial production, such as sandblasting, anodizing and thermal plasma spraying. To create a mechanically stable microstructure, metal ­oxide materials such as aluminium oxide (Al2O3) and chromium oxide (Cr2O3) will be used, which are applied by means of atmospheric plasma spraying, or in the case of aluminium as the substrate, preferably anodized.

Surfaces and above all oxide surfaces usually have absorbed water layers (H2O) and thus also exhibit OH-groups under normal ambient conditions. These OH-groups are required as anchor groups for the covalent attachment of our waterproofing agents.

The nanostructure of Rhenotherm’s previous Lotuflon coating is formed by structured fluoropolymers. But these are soft and vulnerable. It was therefore logical to consider using nanoscale water repellents, since in combination with the metal oxide microstructure and their low layer thickness, they almost reproduce the hardness of the microstructure.

In the field of application of functional coatings, non-stick properties are particularly in demand where adhesives or materials with adhesives such as labels, adhesive tapes, films and foils are processed. Silicone layers with a thickness of up to 100 µm are common non-stick materials in this area, but these are exposed to considerable abrasion stress, especially in industrial use. Thus, there is a fundamental need for systems that are hard, scratch-resistant, abrasion-resistant and preferably using ultra-thin water repellents. The schematic layer structure of the approach is shown in Figure 2. 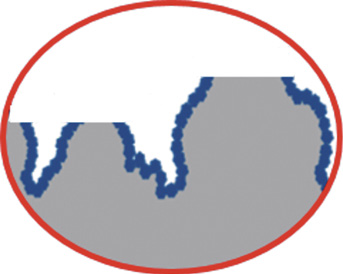 Even if the surface is subjected to extreme abrasive stress (Fig. 3), 90 % of the surface remains intact and provided with a hydrophobic agent, as this is protected in the valleys of the hard ceramic microstructure. Another advantage of the nanoscale waterproofing agents is that the microstructure is not flooded by the hydrophobic material.

Rhenotherm uses NanoCoat 50 as a waterproofing agent, which consists of an organofluorinated chain with a reactive silyl anchor base and a resulting layer thickness of only 20 nm to 50 nm. With the help of the silyl anchor base, the material can covalently bond to hydroxyl groups on the substrate and the organofluorine chain forms the hydrophobic coating surface (Fig. 4).

For coating solution number 1 an ­aluminium substrate is provided with a hard ­anodized layer of around 60 µm thick and ­finally coated with NanoCoat 50 (Fig. 6). Subsequently a water contact angle of 156° and a sliding angle of 25° can be achieved. The hardness of the surface is equal to the hardness of an untreated hard anodized surface and thus depending on the aluminium alloy approximately 400 HV to 600 HV according to Vickers. The roughness of the surface depends on the roughness of the former aluminium surface and for brushed aluminium it is Ra 1,5 µm to 1,7 µm and Rz 10 µm to 14 µm. 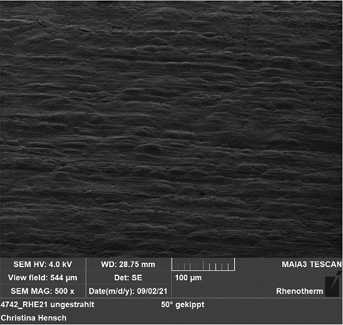 A microstructure is not visible with the naked eye but with an SEM a hierarchical structure is recognizable (Fig. 7). At 200,000 times magnification in the SEM, the typical honeycomb pore structure can be seen on uncoated hard anodized surface (HC surface), which is reproduced by the coating with NanoCoat 50 (Fig. 7).

Coating solution number 2 is achieved by sandblasting an aluminium substrate with corundum FEPA 24 and subsequent hard anodization. Finally coated with NanoCoat 50 a water contact angel of 162° and a sliding angle of 5° is established. The microstructure is mainly derived by sandblasting and results in a final roughness of Ra 9 µm to 12 µm and Rz 60 µm to 80 µm. Via SEM (Fig. 8) it becomes visible that the peaks of the microstructure have a height of around 80 µm while the distance between the peaks is approximately 50 µm so the aspect ratio is approximately 1,6. The nanostructure is visible at 50,000 times magnification and has a size of about 50 nm (Fig. 9). 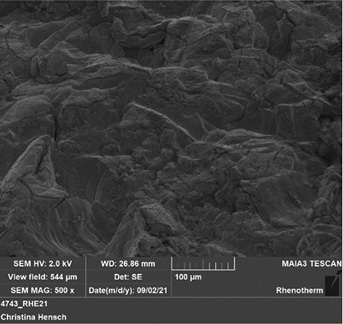 With coating solution number 3 the microstructure is derived by atmospheric plasma spray consisting mainly of aluminium oxide (Al2O3) and titanium oxide (TiO2). This plasma spray layer can be applied to many substrates but preferably to metals. Subsequently the metal oxide layer is coated with NanoCoat 50. The hardness of the surface is equal to the hardness of the metal oxide layer ranging from 1100 HV to 1300 HV according to Vickers. The water contact angle is 160° and the sliding angle is 3°. A final roughness of Ra 5 µm to 6 µm and Rz 25 µm to 40 µm could be achieved. SEM micrographs (Fig. 10) document the roughness of the microstructure accordingly at 500 times magnification. 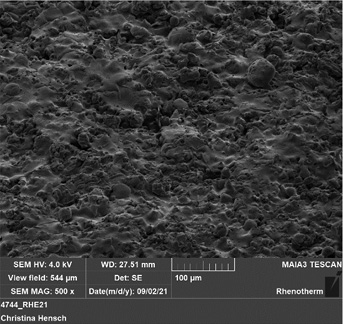 All three coating solutions are superhydrophobic and due to the implemented metal oxide layers also highly mechanical resistant. Although the water contact angle is significantly reduced after the surface was exposed to extensive abrasion via grinding with silicone carbide (SiC) coated abrasive fleece, all three surfaces stay outstanding hydrophobic as can be seen in Figure 12.

To prove the non-stick behaviour, a 90° Peeltest with tesa tape 07475 was conducted. The force needed to peel off the tape of the coated surfaces was measured. As can be seen in Figure 13, the peel force increases after strong abrasion with SiC-coated abrasive fleece, but the tape release is still significantly low. Peel forces for uncoated substrates are 10 N for stainless steel and for a hard anodized surface without water repellent even higher. This leads to the conclusion that even after strong abrasion a significant amount of water repellent is still on the surface providing a long-lasting non-stick behaviour. 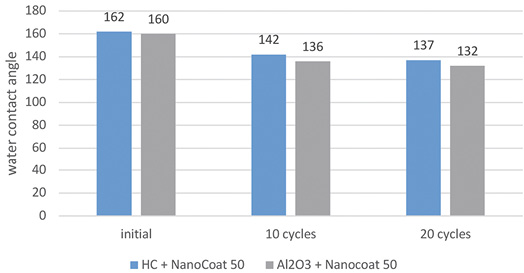 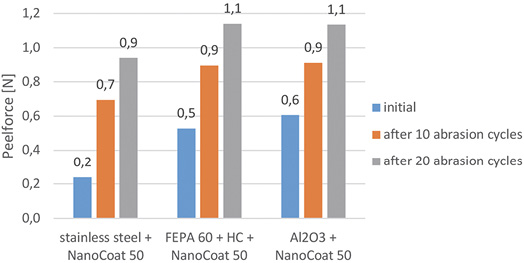 Fig. 13: Peel-Test with test tape initial and after abrasion

Possible applications (Fig. 14) for the described coatings with superhydrophobic properties and excellent tape release are as follows: