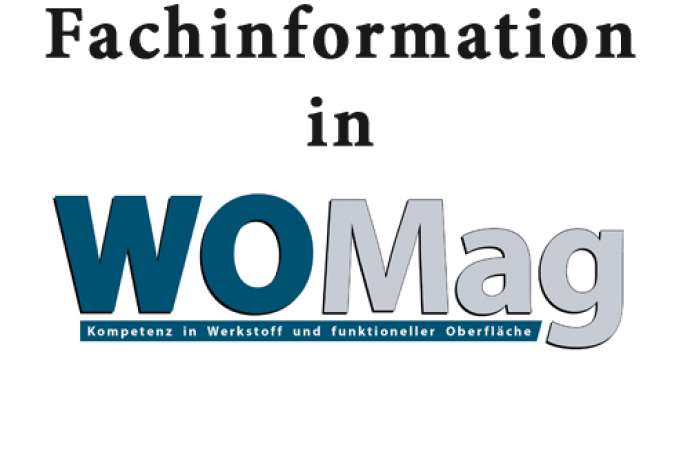 By Delia Gligor and Florina Cuibus

Novel amperometric sensors for nitrite detection based on poly-3,4-ethylenedioxythiophene (PEDOT) were prepared and characterized. An experimental matrix of glassy carbon electrode and two electrolytes (water and acetonitrile) was investigated to prepare these amperometric sensors. The obtained glassy carbon electrodes modified with PEDOT showed excellent electrocatalytic activity towards nitrite oxidation, with a linear relationship between the amperometric signal and the nitrite concentration over the concentration range of 0.001 mM to 1 mM. The sensors presented good stability.

Conducting polymers are relatively new materials, extensively studied during the past two decades and their electrochemistry has recently attracted a great deal of interest, due to their optical, semiconductor and electrocatalytic properties [1–3]. Poly-(3,4-ethylenedioxythiophene) (PEDOT) is one of the most intensively studied conducting polymer, being easily­ prepared by electropolymerization and producing a stable film on the electrode surface [4].

As several kinds of interactions (hydrophobic, electrostatic, etc.) could play a role [5, 6], electrochemical sensors based on PEDOT modified electrodes are expected to be quite selective in amperometric detection scheme. Some sensors for detection of bisphenol [4], catechol and hydroquinone [7], ascorbic acid, uric acid and dopamine [8, 9], nitrite [10] were obtained using PEDOT modified electrodes with different configurations.

The detection of compounds, like nitrites, is of great importance in environmental analyses. Nitrite (NO2−) is an important source of nitrogen in green plants and its complete reduction is achieved in nature by a nitrite reductase enzyme. It is used as an additive in some types of food and its occurrence in soils, waters, foods and physiological systems is prevalent. The presence of excess nitrite in vegetables, drinking water and food products is a serious threat to human health. Nitrite promotes the irreversible oxidation of hemoglobin and reduces the blood capacity to transport oxygen. Also it may interact in the stomach with amines and amides forming highly carcinogenic ­N-nitrosamine, many of which are known to be carcinogens. Therefore, nitrite determination is of great significance for environment security and public health. Monitoring variations of nitrite is important for understanding their biogeochemical processes in aquatic environments and for ­developing better methods of managing water quality [11–19].

Many amperometric sensors for nitrite ­detection based on different mediators were obtained [12, 16, 17], but the modification of an electrode surface with conducting films obtained by electropolymerization of redox monomers has received a great deal of attention. Polymer-modified electrodes with a three-dimensional distribution of mediators are preferable to a monolayer for the design of sensors/biosensors because of the much larger catalytic response of polymer coatings due to the volume effect. Moreover, the long-term operational stability of the polymer film is much higher than that of the adsorbed ­mediator.

In this context, the present work describes the electrochemical oxidation of nitrite on glassy carbon electrodes modified by an electropolymerized PEDOT film. It was compared the electropolymerization of PEDOT in water and acetonitrile, regarding the ­analytical performances of the obtained sensors. The investigation used methods were cyclic voltammetry (CV) and amperometry for the electrochemical properties of the obtained sensors.

All reagents were of analytical grade and used as received. The supporting electrolyte was 0.1 M phosphate buffer solution, obtained by mixing solutions of K2HPO4 and KH2PO4 in appropriate ratios. When necessary, pH was adjusted in the interval 2 to 12 using H3PO4 or KOH solutions.

The nitrite stock solution used throughout this study was made of 0.1 M NaNO2, which was then diluted to reach the desired concentrations. The solutions throughout this work were always prepared using deionized water from a Milli-Q (Millipore, Bedford, USA) device.

The glassy carbon electrode (GC) was mechanically polished with alumina (Al2O3, 13 nm, Degussa) to a mirror finish and then cleaned by sonication in Millipore water. With PEDOT modified glassy carbon electrodes were prepared by potential cycling (10 scans) from −500 mV to +1200 mV vs. (Ag |AgCl/KClsat) electrode at 50 mV/s, in 0.01 M PEDOT solution containing 0.1 M LiClO4 · 3H2O dissolved in water or acetonitrile. The PEDOT concentration in the growing solution was selected to 0.01 M, because preliminary results showed that this concentration is optimal, giving a good voltammetric response of the modified electrode [20].

All presented results are the average of at least three identically prepared electrodes, if not otherwise mentioned.

Cyclic voltammetry was performed in a conventional three electrode system. A platinum wire was used as counter electrode, silver/silver chloride electrode as reference electrode, and the modified glassy carbon electrodes (3 mm diameter) as working ones. All electrochemical experiments were carried out using a Biologic electrochemical analyzer (Biologic SAS Science Instruments, France). All measurements were performed at room temperature. Before each measurement, the platinum wires were cleaned with acetone and then heated to red glow in a butane flame for a few minutes.

Monitoring pH of the phosphate buffer solutions was made using a pH-meter (Inolab, Germany), with a combined glass electrode.

Generally, electropolymerization of PEDOT proceeds through successive electrochemical and chemical steps according to a general E(CE) scheme, until the oligomer becomes insoluble in the electrolytic medium and precipitates onto the electrode surface [21]. In water these oligomers can become soluble, and in acetonitrile these oligomers are stable on the electrode surface, because are insoluble in these solvents. For this, in acetonitrile is possible to reach high positive potentials.

The PEDOT electropolymerization process was optimized in water solution regarding the experimental conditions, such as: potential range (especially the upper limit), potential scan rate, number of ­potential cycles applied to the electrode during the formation of the polymer film, and PEDOT concentration. The best electropolymerization conditions were considered those giving the highest electrocatalytic response of the GC/PEDOT for nitrite oxidation.

During the electropolymerization process, all peak currents increase with successive scanning, indicating that the surface of the working electrode is gradually covered with a conducting film. The peak pairs correspond to a quasi-reversible electron-transfer process. However, when the number of electropolymerization cycles ­increases, its reversibility decreases, suggesting that when the film thickness increases, the charge transfer within the film becomes slower.

The modified GC/PEDOT electrodes obtained in both solvents (water and acetonitrile) during electropolymerization procedure described above, were thoroughly washed with distilled water and after that immersed in buffer solution. Generally, the good stability of the modified electrodes, expressed by the relative invariance of its electrochemical peaks parameters, suggests that a stable, electroactive film of PEDOT was formed on the surface of the glassy carbon electrode during the electropolymerization process.

A linear relationship between the current and nitrite concentration was obtained generally over the concentration range of 0.001 mM to 1 mM. Also, the obtained sensitivity was high (around 1.5 mA/(cm2 M)) and the detection limit was around 1 μM (signal to noise ratio of 3) and the response time was less than 2 s.

Generally, the modified electrodes were used for three consecutive amperometric measurements and the response decreased to 80 % for GC/PEDOT/water, indicating a good operational­ and time stability of obtained amperometric sensors

Novel amperometric sensors for environmental applications (nitrite detection) based on a polymer, poly-3,4-ethylene­dioxythiophene (PEDOT) were prepared and characterized. Glassy carbon electrodes and two solvents (water and acetonitrile) were used for PEDOT electropolymerization, in order to obtain amperometric sensors for nitrite detection. The amperometric detection of nitrite presents a linear relationship between the current and nitrite concentration over the concentration range 0.001 mM to 1 mM. Also, the detection limit was around 1 μM (signal to noise ratio of 3) and the response time was less than 2 s. All these characteristics prove that the obtained electrodes modified with the conducting polymer are promising candidates for the determination of nitrite in real samples, a topic that will be the focus of our future work.

D. G. thanks the Deutsche Forschungsgemeinschaft (Project no. 1200/24-1) for support of her stay at the Technische Universität Ilmenau.